In 1987, Dr. Ben Carson was the lead neurosurgeon of a 70-member surgical team that separated conjoined twins, Patrick and Benjamin Binder, who had been joined at the back of the head (craniopagus twins); the separation surgery held promise in part because of the hopeless existence had Carson not operated.

Conjoined twins are identical twins[1] joined in utero. An extremely rare phenomenon, the occurrence is estimated to range from 1 in 49,000 births to 1 in 189,000 births, with a somewhat higher incidence in Southwest Asia and Africa.[2] Approximately half are stillborn, and an additional one-third die within 24 hours. 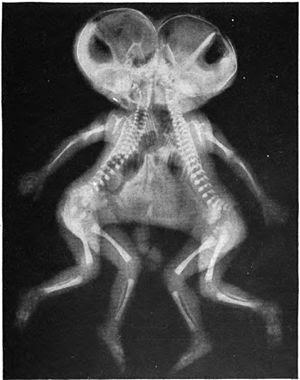 Whether it is human, animal or hatched fowl, deformities and mutations happen. Of course no one wants these unusual beings, but every effort is usually made so they will have a normal life.

Every now and then calves are born with a condition called contracted tendons. It results in the calf not being able to straighten out its front pasterns so they can put their hooves flat on the ground.

Calves that have this end up walking with their front hooves turned back. Some people refer to this also as knuckling.The most often mentioned theory revolves around insufficient room in the uterus for extension and growth of the tendons. Most believe it more often occurs in older cows and in bull calves who form a ball in the uterus. For long periods the ankles are bent back and the tendons do not stretch pre-birth.

Some say it may be mineral related. The minerals that may be involved are manganese and selenium. Vitamin D and E also play a part in muscle and tendon growth in the infantile calf.

Unfortunately, this condition does not have a well-defined cause or solution that I’ve been able to find. Recently on Facebook this photo was published with questions about the why and how of the issue. What causes it and what does an owner do?

Certain plants ( lupine, locoweed, bluebonnet, and poison vetch), if eaten by the pregnant female at just the right point in gestation may contribute to the problem.

The affected calf may straighten out after hobbling around several days, depending on the severity of the knuckling. It’s important in the first few days to make sure the calf nurses. Keeping the cow and calf in a smaller area is advised. Many years ago at DCC a Buelingo calf was born knuckled. We let her attempt to correct and it was not humane. She began to get sores on the front of her ankles above the hoof from walking on the skin. We carved two small boards about a foot long and rounded the corners. Both legs below the knee were wrapped with cloth. A big ball of cloth was placed on the joint above the ankle. The lower leg was stretched straight to where the calf could walk on the hoof correctly. Then the whole thing was wrapped with vet wrap. She immediately began to run and play. In a week or so the splints were removed and no one would ever know that was a problem.

From veterinarian articles no appearance of genetic future occurrences were recorded.

Hopefully this will help when or if you ever have one. You don’t have to call Dr. Carson, just do it yourself. DD

We all will suffer from the loss of this great animal.  We extend our sincere sympathies to the Gilbert family.

We will soon be posting an updated version of our Rules and Regulations to include all changes that have been implemented in recent years.  The majority of these changes have to do with our registration procedures regarding the Hardship program, photographs, qualification for registration and fees.  As always, if there are any questions regarding any of the association’s procedures feel free to contact any member of the Board or the office at any time.  All of these contacts are listed on the website.

Good morning. We all had a great time at Macon and got quite a bit of work done. It was great to see so many watusi lovers. The Board of Directors voted to retain the percentage hardship program and we are continuing to receive applications on some very nice animals. We discussed at length the differing opinions on this program prior to making our decision. If you were hoping for a different result, please don’t feel we ignored your concerns. Any questions, suggestions or such for this or ANY of our programs and procedures are welcome and encouraged from everyone at any time.

More boring information from the Association….LOL. Many more registration applications keep coming in which is very exciting. We have new members, it is spring and we are getting new calves on our farms.  Some of us are trying to catch up on long neglected paperwork (oops, guilty!).  We can use snail mail to send in our applications, money and registration photographs but many of us have discovered the wonderful convenience of using email or texting to submit our photos. This is so wonderful and helpful from the old methods, BUT…
When sending in these photos please remember to include your name and the name of the animal that is in the photograph. Robin never wants to sound picky or pushy, but despite all of her wonderful qualities being psychic is not one of them. I personally, consistently forget to tell the sex of my calves (and horses and donkeys…). I have yet to find anyone that can guess without some input as much as I may try.

Well we should all be home after our Macon adventure.  The WWA  had a good sale with a number of young animals sold, a few adults and and several nice to very nice steers.  Everyone had something to  choose from.    We will post some of the social media accounts and stories from our event.  Here are a few to start with:

From Rachael Moore this great photo and caption:

We are pleased to announce the results of our election for the Board of Director’s for the 2016 through 2017 year.  We are excited to welcome two new members to our Board, Sheri Gurr of Roosevelt, Utah and Matt Moffatt of Piedmont, Oklahoma.  Pat Burnett was reelected for another three year term.  We are all excited to start another year and look forward to further supporting our little association and these wonderful cattle.

We want to express our deep appreciation and gratitude to our outgoing board member, Richard Jackson who has been an invaluable member of this association and board for many, many years.     We would also like to thank Joy Rider for serving as our Treasurer for the past few years.  We know our association will continue to depend on both of these valuable members for years to come

Every year as our annual membership meeting approaches we prepare for our election of new members to the Board of Directors.

Our membership meeting will be held on September 21, 2016 in Macon, Missouri so we must get our ballots ready by July.

There are three positions coming up for election this year for 3 year terms.  If you would like to run or if you know of some other member that would like to run and serve, please contact Pam Jackson, our Secretary,  at rpjackson@wk.net or Cindi Darling, watusi@liarslake.com or Garett Judd, garettjudd@yahoo.com.

This Association belongs to all of our members and as such the determination of our Board of Director’s is important to every one of us.  The qualifications are simple besides a desire to serve, one must be an active, voting member in good standing for two consecutive years with no felony convictions.   We look forward to more participation.

We previously reported that in our September, 2015 meeting the Board of Directors of the World Watusi Association approved a new hardship registration program for female percentage animals.  This has been a very successful program and many previously lost animals have been added to our breeding pool.

For a period of one year from September 23, 2015 through September 22, 2016 in an attempt to recognize animals that have been lost to the registry the World Watusi Association is offering a special category for the Hardship of mature female percentage animals. During this period a non-refundable $100.00 hardship fee, three (3) photos one each from the left side, right side and the front shall be submitted to the Registrar together with an application as complete as possible including the best estimate of the age of the animal and any known information. The animal will be accepted or rejected for registration based upon the ruling of the entire Board of Directors. The Board shall rule in the following categories: 1) Native Pure 2) ¾ Blood 3) ½ Blood or 4) Not a Watusi. Registration fee shall be $25.00 on animals accepted by the board.

Not having any information on the background of the animal submitted for hardship registration does not disqualify it from consideration, but will aid the Board in making a decision.

The World Watusi Association provides a complete searchable listing of all of our registered animals to any member in good standing. Simply enter the site by clicking the link and enter your membership number as your id and your zip code as your password. The system will prompt you to change the password to one of your choice after entering the first time. If your membership number is in the 10000 series it will include a letter at the end,  i.e. 12345A, more recent membership numbers start at 20000 and do not include a letter extension. If you are not in good standing you will not be allowed access. If you have any questions, please email us at help@watusi.org.

TO ALL MEMBERS OF THE WORLD WATUSI ASSOCIATION IN GOOD STANDING – PLEASE READ:

As you know your Association operates a website located at www.watusi.org. We routinely post information, photos and such about the Association and watusi cattle. We are embarking on an exciting new upgrade to our site. When finished we will have available our complete ‘Herd Book’ of pedigree records online in a searchable format. This is where our membership enters the picture. Firstly we are offering to publish a membership list online. We want to recognize your input and privacy so we ask that all of you advise the office of your desire to be included or your wish to not be shown.

In the pedigrees the breeder will show, which will include name, city and state. We also have this same information available for current owner as shown on the certificate of registration. If you desire to have more contact information to be shown please indicate on the attached form and return to the office. All non-responses will be considered opt out decisions. The second item we need your assistance with is our photograph project. The registration certificates contain photographs of the animal, however, most of these are as calves. We would like to be able to link as many adult photographs as possible to these pedigrees.   If you would like to participate please send your photograph (s) to our office watusicattle@outlook.com. Please identify the animal in the photograph.